2020 has been a year for the ages and it's barely half over. And dare I say, not surprisingly, that I and other people have no idea how this turns out. 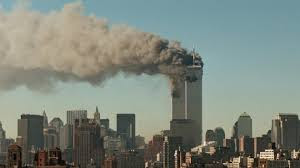 I lived in Manhattan then but I wasn't there when the Twin Towers went down. Let me explain. I was in Los Angeles for the very first Latin Grammys. They were supposed to air the evening of, you guessed it, 9/11.

When you're on the air in the morning you're on East Coast Time no matter where you are.

So I had just wrapped up at six a.m. local time and had gone across the street from Television City to a diner for a bagel. As I'm looking over the menu the waiter, as he's waiting for our order, casually says, "You're from New York right?" "Yes," I answered back. "Well a plane just hit the World Trade Center." I said,"What! A Piper Cub?" His answer? "No a jet airliner."

Well, I rushed out and went back to the CBS bureau and the first words I heard were Bryant Gumble saying, "Oh my, the Pentagon is under attack..." And thus it began.

By the end of the day you could have wrung me out like a dishrag. I went back to my hotel room to watch the chaos, to watch the Twin Towers crumble to the ground, to watch a part of my city  go up in flames.

First all the planes came down. Remember that? Not a jet in the sky. Hadn't seen that before haven't seen that since. News was on the television all day and many New York people couldn't be reached by cell phone because their antennas were on one of those towers. I couldn't call home to check on my wife and daughter.

I couldn't get home for a week because there was no way to get home. LAX was closed and I was stuck. I also wasn't on the show, it was all news.

One time I, along with my dear friend and producer Cathy Black, was heading to a ticket counter to change my flight yet again and saw a line of people walking on Santa Monica Boulevard. People don't walk in LA. If you see a line of ants there may be a cookie or a piece of candy at the end of that line.

At the end of this line? A church.

We pulled over, parked, and went inside. It was packed and the minister was Irish and his soothing lilt was just that, soothing. He talked about how we'd pull through this and his words and the words of the Bible meant so much. In the middle of the service he said to turn to the person next to you to show them love. There was a woman, never saw her before haven't seen her since, who put out her hand for a hand shake. Well, I'm a hugger and when I put out my arms she almost knocked me over, she couldn't hug me fast enough.

Finally there were flights and I was on the first one back to my home, back to New York. I kept hearing about being prepared for long lines; so I left the hotel for my red eye at 7. By 7
:45 I was in front of my gate with my ticket and carry-on. So much for long lines.

Normally when you go from L.A. to New York you fly over the Statue of Liberty and Battery Park. The jet takes a right, you go over the ocean, turn around and land at JFK.

We came in between the George Washington And the Tappan Zee bridges. When we passed over Manhattan everyone went over to the right side of the jet so they could look down. I remember seeing the big hole in the ground with white smoke billowing up. I think the saying is, "You could have heard a pin drop."

When we landed and I got to my apartment I finally was with my family, my wife and my Maya. Maya was six and followed her Dad from room to room glad he was back home.

The next day I was on the air and I have to say this. All the guests, and I do mean all, either lost loved ones as the Towers went down. Or. Had loved ones who survived that awfulness. Or. Were sure their loved ones were still alive in the wreckage. Many sad stories and a lot of tears to go with those stories.

It was the only time you could cry, on live TV, and no one said a word.

One time after the show I was up in my apartment reading the paper. They had the words to God Bless America on the front page.and I was singing and crying simultaneously.  It was a time I'll never forget.

I tell you all this because as I said it's the only thing I can compare today to.

And it doesn't come close.