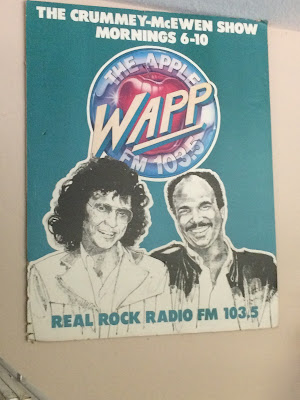 When all was said and done I drove from Chicago to New York in my Camaro.  I'd been hired to work the morning shift at WAPP. The General Manager was Pat McNally who had been the Sales Manager at my radio station in Detroit.

WAPP had announced itself, big time, by going commercial free the summer of 1982, and getting huge ratings in the process. Now they were looking for jocks. I read that, made an audition tape and went east to hopefully get hired. I went to lunch with Pat in New York and at the end of the meal I presented my tape.

"No guarantees," he said as he took it, "I don't do the hiring. That's Dave." Program Director Dave Hamilton.

I shrugged my shoulders in a 'I tried' kind of way, said my goodbyes along with my good to see yous, and left the restaurant. I slowly walked back to my hotel and when I got to my room there was a message from Pat with his AND Dave's work and home numbers.

I got the job.

I found out later why they didn't take me to the station.

Kind of a dump. Kind of didn't care. I was in New York.

I broadcast in Queens, I lived in Manhattan.
Had to live in the Asphalt Jungle.

Here's something you might not know...people who live in Queens or Brooklyn or another borough, even though they live in New York, call Manhattan the city. Like, I'm going to the city Saturday.

Two memories...if you think you know traffic, you haven't lived till you've been in bumper to bumper New York traffic. Early on I was in it waiting to go into the Midtown Tunnel.

That kind of stoppage teaches you Zen also known as how to calm the eff down. I learned a lot about that driving in New York.

As the sun was going down behind the 'scrapers I had a view of the skyline and "The Message" by Grandmaster Flash and the Furious Five came on the radio.

Talk about your New York moment.

Second memory...we had a contest at WAPP called Homegrown looking for the best of the unsigned bands. We then would put the top songs on an album. The winner was a band you may have heard of, Bon Jovi, with a little song called "Runaway."

I'd never been fired before, got fired from WAPP. And that's what brought me to Fats and WNEW-FM. 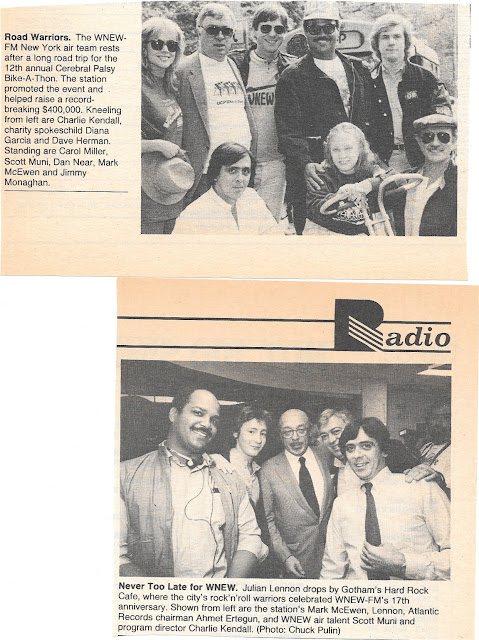 Fats is Scott Muni. He called everyone Fats. AKA Scottso. I used to call NEW the Vatican of rock and roll and Scott Muni it's pope.

Consider this...years later, I'm working for CBS and interviewing Billy Joel. I tell him I used to work at NEW and he proceeds to do a spot on imitation of... Scottso. Jerry Garcia told me to say hi to Scott. Bruce spoke highly of Fats and on it went.

Scott hired me after a tour of some of the finest drinking establishments in Manhattan. I won't tell you what we were drinking but tea would be a bad guess.

At first I worked the over night. Let me say something about that audience in New York. It's big. There are as many people listening then, than some cities have at drive time. I once had Angela Bowie (The Angie in Angie by the Stones) in the studio unannounced. Just hanging out.

It was New York.

One time it was a block party weekend and we were playing like maybe two artist blocks per hour and I started one with the New York/kind of punk band, Television. They were not on the play list.

The hot line rang. It was Charlie Kendall (the best Program Director I ever worked for) and he said, "Hey, you're cheating." Pause. "I like how you cheat." 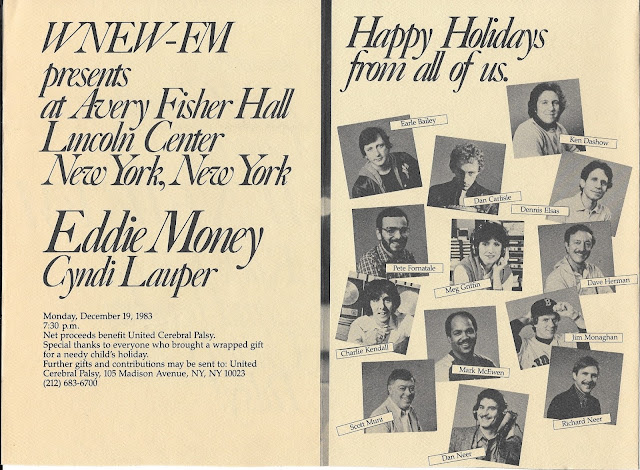 It was big fun working there.

The way I got added to the morning show was...different. They were live all Valentine's week. I'd do my shift, take a cab down to the club they were at, Heartbreak, and be live on their show as well. And try to be funny. 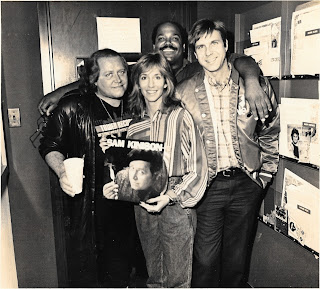 It was Howard Stern who was responsible for me getting fired the second time. His ratings were too strong and ours not strong enough.

There's a goofy ending to this and here it goes....When I got fired by NEW, CBS was putting together their new morning show. They saw the story in the Daily News about us and brought me in for an audition to be their weather guy.

It was Charlie Kendall asking me if I would come back to fill in. I told him no.

"Ok, ok, you drive a hard bargain," he said with a laugh. "How about full time?" When I again said no, Charlie said incredulously, "You must have something big." 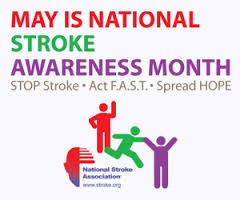 As the saying goes, all day. In this case, all month.

As a stroke survivor this month is special to me. Ask my fellow survivors what month is ours. They'll tell you. Before a stroke? Just May. After a stroke? A month to turn the spotlight on stroke, on us.

You've heard me say this before that I wouldn't wish a stroke on my worst enemy. I wouldn't. They're that bad. Going through one is terrible. There are people who've had multiple ones. Two things...I can't imagine the strength it takes to endure that. And a big tip of my hat to you.

Okay let's talk about something that isn't mentioned enough. The financial aftermath of a stroke.

Imagine this, you're going along fine, going to work everyday. Paying bills, going on vacation, maybe putting money away for the future or for that rainy day and then...tragedy strikes. When you break a leg or have an operation or survive a heart attack you convalesce, you heal. You may move slower after that but you move slower back at work.

In many cases, a stroke survivor can tell you a different story.

For many there is no back at work. There's just this new life and that life involves hospitals, rehab, and a new financial reality. Man, rehab is tough and while you're trying to get yourself better, here they come-bills. Before a stroke, a bill, a mortgage, was something you got to right away. After a stroke they're something that can drain your bank account right quick.

There are forums all across Facebook full of stories of people dealing with this new reality. Some are full of grit and determination, some just break your heart.

There is a group of great people here. It's called the Central Florida Stroke Club. There are groups like it all across the country. I like being with them, it's like going home. We laugh, we scratch, and share stories, experiences, with each other. I've heard stories about the toll stroke has taken financially, stories told with grace and dignity. Of course, they're preaching to the choir in that it's a road I've gone down myself.

As you know, I was on television for a long time. Having a stroke changed all that. I've spent awhile trying to figure out my part two. That old saying goes that when one door closes, you know the rest. I've seen more closed doors than I care to mention. I have no answers other than you have to keep on keeping on. Keep on fighting. That goes with the financial strains as well.

You know that song from Annie that says, "Tomorrow, I love ya?" Well that song speaks volumes to me, to us.

Things You Think About When You're Older

When you're young you have no idea what 'Spring Chicken' means. Or the phrase 'Youth is wasted on the Young.'  As you get older you know exactly what each one means.

When I was real little the only worry I had in life was finding my cowboy boots and my cowboy hat. I was young, footloose, and unaware of what was going on outside my sand box. It also could be called the 'I need to ask someone about that' period. There were so many things I either heard wrong or saw wrong or read wrong.

I read that flying cars were coming. They would be here by the time I was old enough to have my drivers license and I was in a panic. I wouldn't be able to drive! Well you know and I know, we're still waiting for that to happen.

And don't get me started on why it's called a hamburger. When I was little I kept looking for ham.

One time, when I was in Fourth Grade, I told my teacher that my stomach hurt (it didn't), trying to convince him to let me go home from school. I told him I overheard my parents saying I might have appen-dick-itis. I'd never heard the word said I had only read it. He looked at me funny and asked, "What did they say?" I repeated myself and he told me to go sit back down.

Like I said, the 'I need to ask someone about that' period.

A bit later in life, I was eleven, I got into a fight on the school bus with a girl. Before you make a face consider a few things. At that age she was bigger and stronger than me. It was self defense. And she beat me like a drum. Like a drum.

The story has a happy ending, though.

Remember when a beat down from a girl went hand in hand with things like that? You don't? We ended up being friends and for a time boyfriend and girlfriend. Well, as much as that can be when you're eleven.

One day I saw a full station wagon and it made me think how do you get a car, a house, a wife, a family?  How do you get a job?  Never thinking some day I'd have all of those and be a father and husband, as well.

Cut ahead to French class in 8th Grade.

My teacher gave me a new name. Marcel. I guess she thought that was close enough to Mark. Having lived in Germany, I used to read a question in French, think in English and speak German. That went over really well. I've never used French my whole life or Geometry either. When you're young you don't know that certain classes will become a 'remember when...'

Matter of fact, there are a lot of things that you think will be forever when you're younger that aren't.

I bet there are people that can remember someone who was in their life at one time who made them feel a certain way.

I bet you they can still remember their name.

Things you think about when you're older.