You want to know how you build a memory? You see Bruce Springsteen on Broadway. That's a good start.

As you can guess, there's a story behind this one.

To begin with you have to go back to this spring. Actually you could go back to the summer of '72. Since the tickets were a birthday present for my dear friend Howard you could start with the day I first saw him at the University of Maryland, Go Terps!, way back then.

You could start with the May dinner I had with his wonderful wife and also my dear friend, Barbara. At that dinner she came up with the idea.  She was here for a board meeting and since they live in New York,  I was lamenting how I hardly get to see Howard now that I'm in Orlando. She listened, smiled, and said, "Let me see what I can do."

That was the genesis. 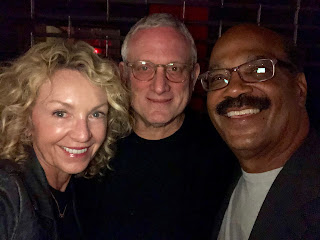 And she made it look easy peasy.

You know how they yell, "Surprise!" for your birthday? This was a real, ya got me, ya got me, didn't see that one coming, surprise when she pulled it on him at his bday dinner. I saw it all on  videotape. It was preceded by my video singing Happy Birthday and for the first time Howard heard me say he was going to see Bruce and I was going to be his date. That right there was a moment in time.

And that's how I found myself on Delta heading north to see Manhattan, The Boss and The Gruffermans.

Great, not good but great, times were ahead.

I got there on the Wednesday after his Thursday birthday and Howard met me at LaGuardia. It was great seeing him. Compound that by the fact we were going to see Bruce that night and you had two giggly boys on your hands. Saw and hugged, hard, their daughter Sarah. Had a wonderful plate of spaghetti and meatballs and then off we went to the William Kerr Theatre. 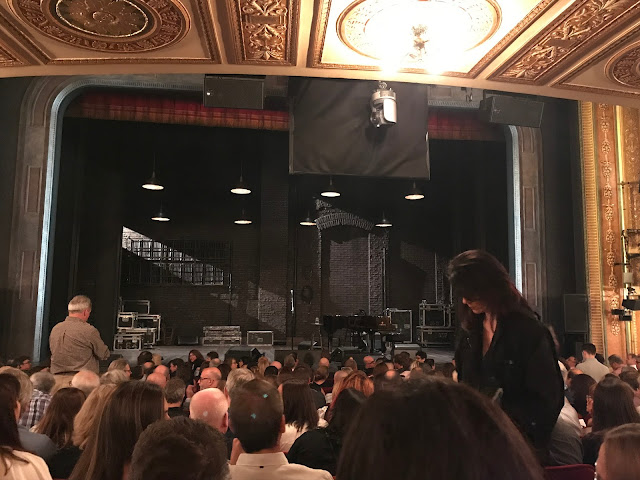 As we were settling into our seats we found ourselves looking around at faces just as excited as we were. And then the lights went down and there he was.

There were two mikes on the stage. One at front and center so he could play guitar, and sometimes harmonica, to accompany him.  The second mike was next to the other main prop onstage, a baby grand piano that he also played while he sang.

What surprised me was how much he talked and how funny he always is. Most of the dialogue was directly from his book, Born to Run, and that dialogue helped to tell the story. Did I say funny? I'll give you an example...He pointed out that he's never had a legitimate job in his life. He's never worked 9-5. Yet he said, "I've been wildly successful writing about the working man."

Everyone laughed including me.

Back to funny, he said he spent his whole life trying to get away from his hometown and then wryly mentioned that he now lives 10 minutes from it.

Back and forth he went between acoustic guitar and piano. One time, as he was singing "Tenth Avenue Freeze Out" at the piano, he went into an extended tribute to the no longer with us, Clarence Clemons. He said some glorious things about his friend, The Big Man. There wasn't a dry eye in the house.

I had gotten a little misty already when he did "Thunder Road" earlier. When he sang the opening lines, "The screen door slams Mary's dress waves," I had a lump in my throat the size of Denver. I was in college when that came out.

I still know all the words. 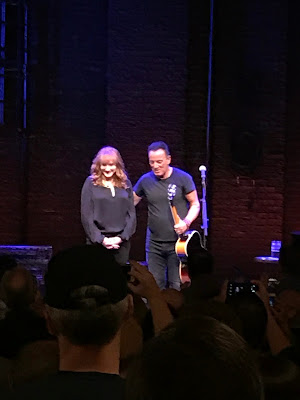 It was a true one man show. The only man was him. Then all of a sudden after a warm and loving introduction someone came out and surprised all of us. Still a one man show the person was a woman. Patti Scialfa, his wife. And the place went nuts.

They played some songs together which included "Tougher than the Rest" and one of my favorites, "Brilliant Disguise."

"God have mercy on the man who doubts what he's sure of."

She left and it was wrapping up time. Bruce told a great story about the book Born on the Fourth of July and then went into a searing, stark version of "Born In The USA."

Or as he put it his protest song.

He told a few more stories, played a few more songs and ended the night. This was not a concert, this was a Broadway show.  The last song?

And then Bruce was gone. 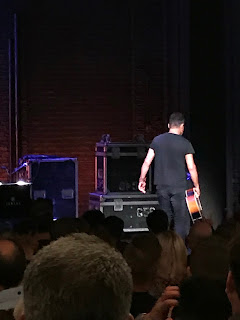 I've seen some great shows, this was Special. And all the people in the theater thought the same way. Howard and I were grinning from ear to ear as we left.

The first of two epilogues.

Outside, the security had set up two metal barriers with a driveway between them. On the edge of that driveway was a black Ford Expedition with tinted windows. Just idling. I bet you know where this is going. No sooner had Howard said, "Hold on a minute," when out come Patti and Bruce. He got up on the step of the Expedition and waved to the crowd. The roar coming back shook Broadway.

And then they got in and were driven away.

That night the Yankees were playing the Cleveland Indians in the playoffs. They had been down 2-0, this was to come back and even the games at 2-2. As we went across town after the show you could hear cheers from the Yankee fans, gathered around a TV in a raucous saloon, whenever the home team did something great. We'd pass one cheering bar and then go on to the next cheering bar and the next.

They ended up winning that game and that series. 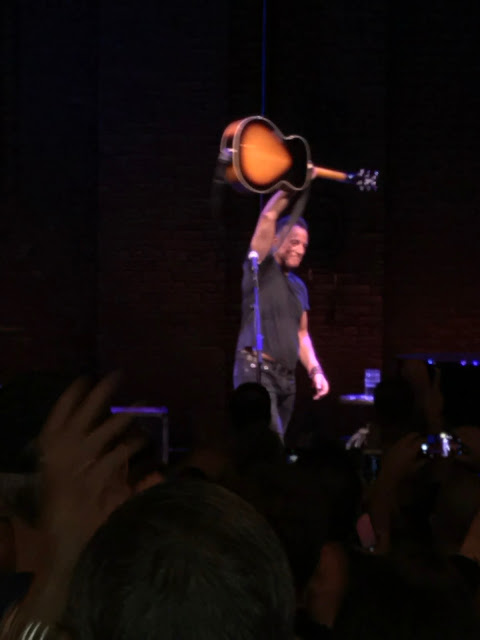 And that's how you build a memory.