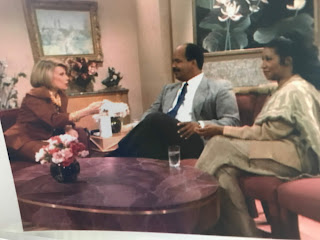 Let's do one differently.

Instead of telling you how sad I am, very, or how much my brother cried when he heard the news, a lot, let's celebrate her, let me share some memories I have of her.

This picture is from the short lived Joan Rivers Show. Joan, rest her soul, had me and Aretha on  that day. Aretha I could see but me?

So we're talking and Joan says, on live teevee, "Aretha you should date Mark." WHAT? Aretha was very kind and said, in a very nice way, I don't think so.

Me? I just about died.

Just to set the record straight we never dated.

I've written about this before but the first time I met Whitney Houston was at the Grammys. She had won big that year because of, and I'll bet you had this, I Will Always Love You.

We all had it.

As we're getting ready for our interview I tell her Aretha had just been here.  She beamed and said, "Aunt Re Re?"

I thought to myself, "Aunt Re Re."

How cool is it to call Aretha Franklin,"Aunt Re Re?"

This right here is a great tribute.

It includes Aretha singing a great opera aria Nessun Dorma. 1998 Grammys, live, and keep in mind she was filling in.

She didn't have all week to rehearse.

It makes me cry.

And yet another Aretha memory.

It was Bill Clinton's inauguration.

I was there to do a piece for 48 Hours on Quincy Jones. As I'm getting closer to the Lincoln Memorial  I hear what sounds like a tape. I turn the corner and Miss Franklin is on the steps, with a mic. She has on a white mink coat and has her handbag under one arm.

I swear this happened.

On her second Respect, she spells it and without missing a beat says, "Hi Mark," and goes right back to "Find out what it means to me."

I'm at the Kennedy Center Honors. Actually I'm in Aretha's hotel lobby. She was being honored and was supposed to have left for the gala already. But. She was late. Remember, she is a diva. The elevator came down, the doors open and out steps Aretha Franklin.  I had a cameraman with me and by this time I'd interviewed her a couple of times.

"Can I just get a couple of minutes?"

"Tell me about the title Queen of Soul. That's a great name to have."

She looks me straight in the face and and says," Haven't we talked about that enough?"

I agreed,"Yes, we sure have," and asked a different question. You do watchya gotta do. 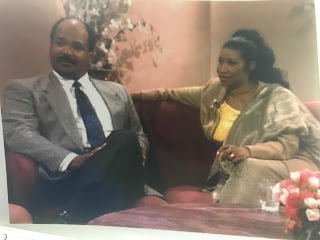 Will we have a singer like her again? I don't know. It was a different time. Trail blazing times.

Aretha Franklin, the trail blazer, is one of those Mount Rushmore kind of people.

Weatherwise this has been one wild and weird summer.

The last two were jokes.

Have you been watching the evening news? You know when they lead with weather something is wrong. This summer it seems like it's been the top story a lot. Planes dropping that red stuff over fires in the wilderness. Dams almost bursting, delays at airports due to bad weather and it seems heavy rain everywhere.

If you want to get depressed...

It feels like every day you see firefighters, first responders, just everyday people, all looking dazed and confused, battling what ole Mother Nature has brought.

I have a daughter who lives in California and it's been blazingly hot and dry. There are out of control wildfires all over the West. I have a dear friend who lives in Lynchburg, Virginia. The dam there was threatening to burst so evacuations were the order of the day. My father lives in Maryland where the flooding has been really bad. I lived in New York city for over 20 years and a tornado touched down there.

I've never heard of that.

I haven't even mentioned the state I live in, Florida.

It's rained here the most I've ever seen it rain and I've lived here 14 years. And not just rain but rain. Raining so hard that you can't see your neighbor's house across the street.

If you want to start a conversation go to a store and as you're checking out casually say to the cashier, "Sure has rained a lot this summer."

And then stand back.

I've always said that a rain storm up north is just a rain storm. Down here? It's like the end of the world. With thunder so loud my dog barks.

There are a couple of good things here as far as lots of rain is concerned. First of all, Florida is hot. Rain helps to make it cooler, not much, but cooler nonetheless. Also the lawns down here are lush. I'm sure they can't believe how much water they're getting.

I'll tell you a secret...my wife is a gardener and she has a sign that says 'Gardeners know the best dirt.' Our house has plants all around it. When it doesn't rain she has me water the plants with the hose. When it does, as they say, "I'm good."

That kinda has me hoping for rain.

The ponds around where I live are filled to the brim with water. Last year at this time we had a drought and all the water levels were way down.

What filled them up then was that thing that begins with H. We had a big one last year. Irma. And here's the rub. Our worst months for them are September and October.

Look at the calendar. It's August.

We've already had rain, rain, and more rain. We still have the potential of what's to come. And you can file it under you ain't seen nothing yet. 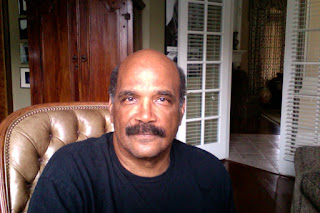