School's Out For The Summer


My 14 year old twins' school year which began back in August is now officially over. No more eighth grade, next stop High School.

I remember when they went to first grade.  It  seems like it was yesterday to this Dad. Notebooks, pencils, Elmer's glue, and on and on. Remember buying all the stuff they didn't need in kindergarten?

An upside of having a stroke, yes kids there is one, was the chance to take them to school. To watch them go from children to these 'guys.' To watch them grow. To hear their pearls of wisdom get sharper as they got older.

They're not. Oh sure there are things that together they do and don't like but they're different as night and day. At least that's my take on it. Ask parents of twins, they'll tell you.

Memories...playing Shake Your Booty by KC and The Sunshine Band and one of my twins, Griffin, laughing because he thought it was so naughty that they actually sang what to him was a bad word-- "booty." Miles loved Earth Wind and Fire's September because he could sing along to the "ba-di-yas."

Driving them to school in the car and passing a, shall we say, hefty guy and hearing them giggling in the back seat as they saw him.

Eating with my guys at school and bringing them gold from McDonald's. Having lunch outside at the picnic tables with them.

In Middle School they began to be concerned with what other kids thought. With me still driving them to school they loved when the other students saw our Lola in the car as they were dropped off. The kids pointed and said, "Doggie!"

No kissing them goodbye. No being a goofy Daddy during sleep overs. And I was a substitute teacher this year which brought this new rule. Definitely no subbing at their school.

The end of the year Eighth Grade Dance was really something.

First, they got dressed up.

Second, the line for dropping them off for that was long. There were even a few stretch limos in that line. Since we're talking I thought at one time only movie stars and rock stars rode in them. I was flabbergasted when I found out that anyone could ride if they rented them.

They all went to Steak and Shake afterwards and that scene was right out of the movies. Orchestrated chaos. Girls in gowns, some of them in wobbly high heels. Some had taken those shoes off and were barefoot which prompted Miles to declare, "That's nasty."

The boys were dressed to the nines and trying to appeal to the girls. Some of their lines worked and some did not. And some kids were just as happy ignoring the other sex.

When they're real young your children are lumps of clay. As they grow and get older they become  these people. These wonderful people.

Griffin makes videos. He has over 2200 subscribers on youtube. He wants to have his own cartoon series one day. Miles says he wants to tell stories, be a screen writer or an author. He's shot up and now basketball is on the horizon.

It'll be fun to see them evolve even more.

One thing my father knew and I've learned is that being a parent is a whole lot different than being a kid. For one thing you're constantly amazed by them. For another you're always worried for them. And no matter how old they get they're always your kid.

I just got back from the road and this was quite a trip.

First of all it's nice being away from home. Yes, I missed my twins and my step daughter and my mother in law and my wife and my dog but it was good to miss them.

I'll tell you a secret, I really missed my dog, Lola, she's such a good friend.

My wife, too. If you're married you know you always love your wife but absence does make the heart grow fonder. And being away accomplishes that.

So off I went to DC with a stop in Charlotte. I had been suffering from a cough and it seemed everyone on the way up coughed as well. Like everyone. On the planes, in the terminals, I wasn't far from a hack and in a way it was kind of nice to know that everyone had what I had.

When I finally arrived at the hotel in Washington it was great to be in the room and perusing the room service menu. I'm boring when working, I was there to give a speech, and instead of going out carousing, staying in the room in my shorts and a T shirt is fine by me.

I extended my stay, and I'll tell you why in a minute, and had extended my rental car and they wanted to charge me double for that.  When you rent in Washington and return in Maryland that spells double.

She had all these ideas after first being aghast at the rental price. Renting the car for one day and driving it to BWI airport, turning it in and then renting another one there was an option. Taking an Uber was my idea but she thought that might be too expensive. We hung up and I called down to the hotel operator and asked to be transferred to the concierge. She informed me that the concierge had left for the day and that's when the whole thing took off.

When I told her my predicament she took over. "Do you have a laptop or a way to get to the internet?" I told her I had an iPad and off we went. When were done she showed me how to take the Metro to a bus that would take me to Baltimore Washington Int'l airport and to the rental cars. Booked the reservation and went to sleep.

With a smile on my face.

The next day was the speech, which went very well, for the Cardiovascular Health Policy Summit. I did some Q & A afterwards and headed outside to go to the Metro station. My guide mentioned how hot it was and I wryly thought, "I live in Florida, you don't know heat."

I rode both, rented the car, and went to see my 89 year old Dad who I hadn't seen since January. Every time I see him is precious and this was no different. Dinner with him and my sister was divine and we were eating good in the neighborhood.

Afterwards I headed to my brother, the Kirkster, where I stayed the rest of the week and he's the reason why I extended my stay. He's a rock and roll Disc Jockey on Baltimore's 98Rock, he's a stand up comic, and he also has sung with his band, and his new band's first gig was that Friday.

I wanted to be there for that.

The band sings Tom Petty songs and is named, wait for it, Petty Coat Junction.

Now to get to that night meant I would have to go through a few things. In no particular order they were: two podcasts, being on the air with my brother, seeing my Dad not once, not twice, but three times. I also saw my BFF, Tony Colter, twice and had dinner with him and the fellas.

And it rained, hard, the whole week.

So there I was that Friday evening, in a packed club, waiting like everyone else for them to begin and take us there.

And they did not disappoint. 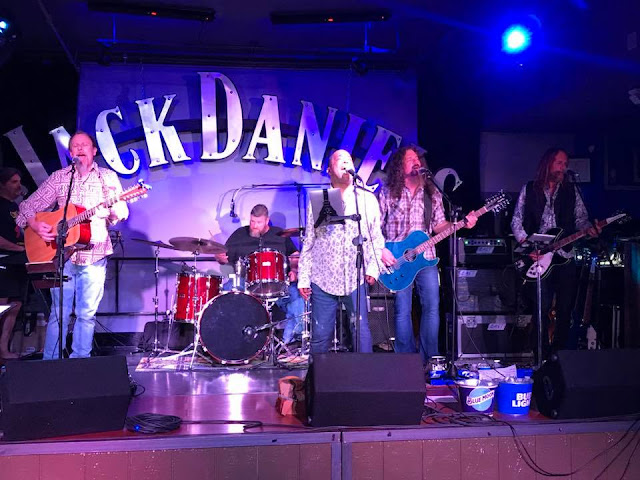 Man, they were good.

I'm always amazed at how talented my brother is. And remember he's my brother and I've known him a long time. The band was superb and played like they wrote every song. And the songs? I'll just say that I love me some Tom Petty.

All the songs were there and the night was a Special Night.

The next day I drove to the airport, through the driving rain, turned the car in and flew home. And grinned all the way there.

One last thing. When we landed it was raining here.