And it just keeps coming.
Hank Aaron is gone. 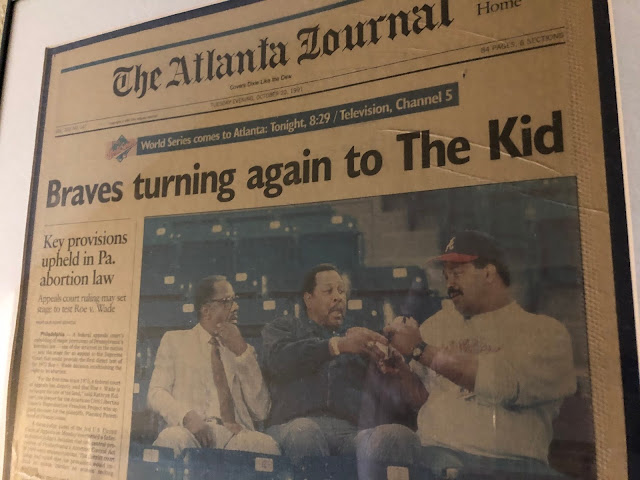 Now if you're younger you may not even know who he is but if you're my age you definitely know. Hank was a Hall of Famer and broke Babe Ruth's all time home run record. Again if you're younger you might have no idea how big a deal that was.
A very big deal.
That picture was from the front page of the Atlanta paper and it was taken in the Fulton County Stadium stands after my show on CBS. The Atlanta Braves were going to the World Series for the first time. Oh, the Braves had been there before but that was when they were the Milwaukee Braves.
Big deal in Atlanta. Huge.
There's a story behind this pic. I'm there with two Hall of Famers, Willie Stargell is the other one. If you know your baseball you know that Willie played his whole career with Pittsburgh and for the life of me I can't remember why he was there.
I was excited to meet both of them.
You see Hammerin' Hank as he was known was this beacon of light for us Black people. Not only was he great but the home runs he hit kept growing in numbers and my pride in him got bigger and bigger. He never hit 50 but he hit 40 or more 8 times.
No steroids, no weak pitching, and now add the racist taunts he heard all the time as he was playing and tough is a good word.  They say that in his final chase to break Ruth's record he got more mail than anyone in baseball and most of those letters were from people who didn't want him to do that.
That didn't stop him, he kept going.
Hank saw Jackie Robinson when he was young and that changed his life. Before Jackie Major League Baseball was all White. You didn't see brown faces like you see all the time today. You could aspire to play in the Negro Leagues but that was pretty much it. Jackie showed there was a new path and Hank took it. He went on to greatness and I followed everything he did. And through it all Hank was this quiet, caring, decent man.
Back to that picture.
I was glad to meet Willie but I was really glad to meet Henry Aaron and gush all over him. To tell him how important he was to me and how great a player, how great a person I thought he was. You know how people say something brings them back to when they were a kid? That was me. And as you can see I got him to sign a baseball.
It's one of my prized possessions. 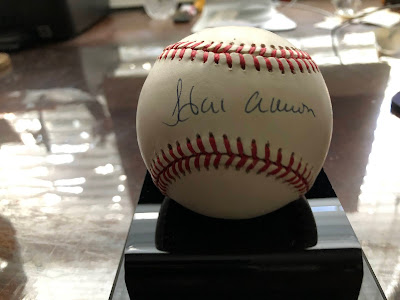 The Atlanta Braves didn't win that World Series but I didn't care. In my mind I got to do the most important thing.
I met Henry Aaron.
And the news of him passing was a shock to me. I don't know how else to put it. I always say I'm old because I am but that information brought me back to when I was ten and when I first discovered baseball.
There are few things that can do that.

Tommy Lasorda has passed. That news made this guy stop.
You may ask why someone who lived in New York forever and even wears a Yankees hat all the time because he's a huge fan would be so affected.
Let me tell you a story.
Every year on CBS I used to do spring training and Vero Beach was always on our list and you know why. I'm a baseball guy so it was always a great time for me plus while most of the country was up to their ears in winter it gave me a chance to show them Hawaiian shirts, sunglasses, and shorts.
Win win.
I would wear Frank Howard's uniform because it was the only one that would fit me. In case you don't know Frank is 6 foot seven and huge and since I was, ahem, bigger then a match was made. I used to bat and pitch and field and interview Tommy.
I can still remember him saying things on the air like, "You're wearing Dodger Blue. Notice how you're standing taller, standing prouder." He was one of a kind plus he was very nice. I thought he was great.
One time I was batting against Orel Hershiser who was pitching with Mike Piazza catching. Orel whispered to me, "You have to hit because you're on teevee so I'll let you." He actually said that to me. Great guy also.
So there I was getting hits off of Orel Hershiser.
Mike Piazza referred to Lasorda as Uncle Tommy because he was the reason that Mike was in the bigs in the first place and playing for the Dodgers. Lasorda saw him as a very young ball player and stuck his neck out for him. I thought Tommy was his real uncle. Of course he wasn't but I didn't know that. I do know that Mike Piazza is in the Baseball Hall of Fame.
Great eye Tommy.
After leaving Dodgertown the next stop was Tampa spring training home of the Yankees. I tell you this story because it has always been one of my favorites. Remember I said I always wore a team uni?  I was putting on a Yankee uniform when Reggie Jackson walked by, stopped, and fiddled with my uniform for about 15 minutes till it was just right. Reggie said, "You may not be a ball player but you have to look like one." And that's why that story has been told so much.
Back to the Dodgers and Tommy.
The next day I'm on the air with Joe Torre and Yogi Berra. I always say that every now and then you see real tv. This was one of those times. Joe Torre says to me on live television, "I saw you yesterday with Tommy Lasorda and you were wearing a Dodger uniform. I was sick to my stomach."  What?! He was teasing but I didn't know that. I began to stutter and stammer as I said, "I'm sorry." Like I said every now and then...
Tommy Lasorda was one of a kind. He was decent, kind, funny and he always said he bled Dodger Blue.
Always. I know Los Angeles is in mourning.
Rest in Peace Mister Lasorda.