Flags At Half Mast

Where I live we have flag poles at either end of our main drag.
They seem to be at half mast all the time. So much so that I have to think: why are they like that before I remember why. For those who don't know a flag is at half mast when someone dies.
We were just beginning to process Atlanta and now here comes Boulder.
Man, those flag poles get a lot of work. Am I getting numb to why it's like that? Are we getting numb? Can I ask, along with many other people, why don't we do something about this? Yeah, yeah, I've heard that they're coming to take our guns and the Second Amendment and all that.
But.
I don't remember any uproar over seatbelts in cars. They long ago made that the law. Here the phrase is 'Click-it or ticket.' Even whisper the words gun control and stand back and watch the uproar.
People aren't saying take your guns away they're just saying to license them plus have stiffer background checks so people who shouldn't have guns don't get them.
Is that such a big deal?
Tell people who've lost their father, their mother, their husband, their wife, their children. Losing them is a forever thing. Something you think about every day, every night, all the time, thinking about the person who is no longer here.
I see people in a dark room crying.
Imagine if it was you. Imagine if it were your daughter, your father, your mother, your son. I don't know about you but if it were me? I'd be the one in the dark room crying.
And while we're at it I'm not talking about taking away hunting rifles or guns that a person uses for protection. But a question that I and many others ask: What are you hunting with an assault rifle?
The answer is people.
In my humble opinion you shouldn't be able to do that. I feel for the people in Boulder who were just shopping for bread, for dinner, for groceries. And then everything changed likethat.
Where I live we have flag poles at either end of our main drag. It seems they're always at half mast.
So sad. So very sad.

I got interviewed by my Stepdaughter Jenna in our house. And this from a very proud Stepfather. 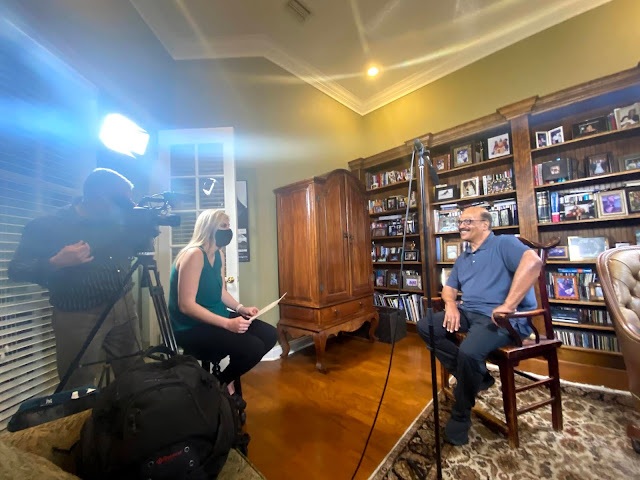 It was for Stroke Awareness Month and we all know it's May so we were getting a jump on things. Jenna graduated from college and unlike many of her peers got a jay-oh-bee. 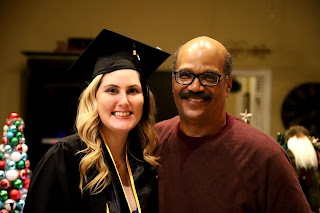 She works at Ivanhoe Broadcast News a place that makes pieces for television news.  They go to local stations all around the country and are shown in, all together now, over 50 million homes.
That's a lot of eyeballs.
I'm married to her Mom and I first met Jenna when she was five. I've known her a long time and it's been so much fun to watch her grow and blossom. 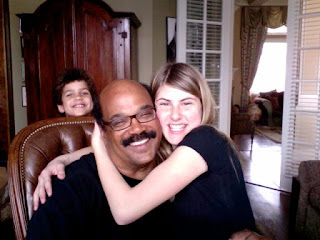 She was a news anchor on her middle school and then high school TV channels. When she went to college she did that and much more. She learned how to edit, how to produce, as well as being an on air reporter. During the whole time she would show me tapes and I was very impressed.
Because of the pandemic times are a bit different and graduating now and looking for a job can be very difficult. But all her life difficult has been just a word. So every morning, Monday thru Friday, Jenna leaves the house, gets in her car, and off she goes. It's great to see her in work clothes and great for me to say, "Bye Bye."
Meanwhile do you know what it's like to see a camera crew coming up your sidewalk with your Stepdaughter leading the way? It touched this guy's heart and this guy's chest was puffing way out.
She asked great questions. Listened and followed up on things I said and just did a bang-up job. 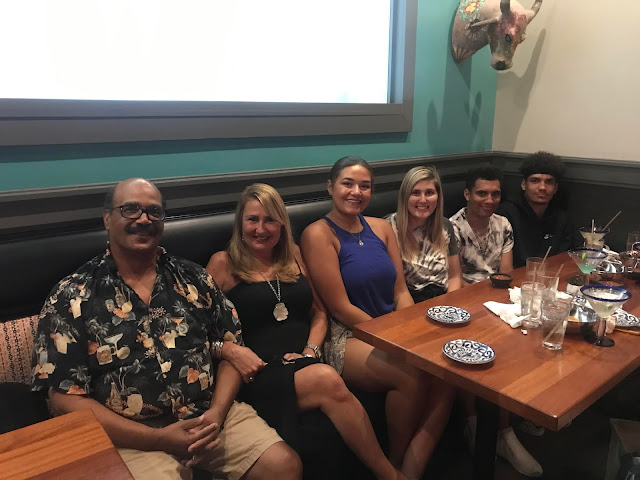 It's been almost a month since my Dad died.
It's hard to write that sentence.
First off my heart goes out to people who are in the crowded boat I'm in. As I've said before not a boat you want to be in.
Let's do a bit of history.
Preparing for Dad's service I found myself in a dilemma. Do I fly up there to be there in person? Being a stroke survivor gave me pause about flying. I've got a bullseye on my back, I think the term is At Risk. Because of Covid-19 I haven't been on a jet since October 2019. Heck I'm nervous about even going to the airport. I picked up my Maya when she came to visit back in September. When she was leaving I parked the car and went inside. Heard the theme from Jaws the entire time.

So I had that voice in my head saying "You might catch it." But there's more. What if I brought something with me? I didn't want to do that. But he's my Father. So you can see my dilemma.

I went back and forth and asked everybody. They all said not to do it.

Then I thought I would just drive up there. It's 11 hours, one way, from Florida to Maryland. Again I asked everybody and the consensus was again "Don't do it."

Then someone came up with the idea to include me via Zoom. Like most people I first heard of Zoom last year. You see Zoom guests all over news shows and we, the viewers, are used to it by now. We're used to the fact that some Zooms are sharper and more in focus and some aren't.

To be honest, I'd never been part of a service with Zoom much less my Father's service.

So there I was with my wife and my twins in front of my computer to honor my Dad, their Pop Pop. I told myself I wouldn't cry and I was wrong.

The Reverend couldn't have been nicer or better, it was a walk down memory lane. He talked about Dad's life and talked about how great he was in the church choir, how loved he was at his Assisted Living home. The organ played, he spoke, they even played a song my Dad sang from his CD that he made for my autistic brother Sean.

And then it was time for his kids to talk. And here came the tears.

And then it was my turn.

I did tell a famous McEwen story.

My Dad's name was Alfred and one day a letter came to the house addressed to Albert McEwen. Well, my brother thought that was so funny and used to call my Dad Bert all the time after that. Cut ahead to a vacation in Cancun and Kirk tried to get my Father's attention from across a street. He yelled,"Hey Bert!"

A snooty man heard him, turned to my Dad and said, "You know, I don't let my kids call me by my name." Without missing a beat Dad smiled and said, "That's not my name."

When it finally was over I was so glad to be a part of it. It's a memory I won't ever forget.

I got to say goodbye to my Father. 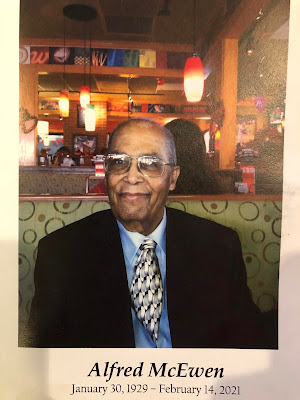 I got to say goodbye to my Dad.

I got my vaccination.
I don't even have to tell you for what I bet you already know.
My appointment was for 9:30 but I was wide awake at 6. Can you say excited? I had about three hours to read the papers, shower, shave, and have coffee. All that was done by 6:30.
Finally 9 rolled around and I was off. Let me explain something, the distribution of shots will make you shake your head. I'm on three waiting lists-nada. It was our neighbor who told my wife about shots at our local church. That's how I found myself in it's quickly filling up parking lot. You were instructed to call and make an appointment, which I did, and to bring your drivers license to verify your age and I did that too.
The policeman at the front made me feel great. He looked at my license and asked, "Are you a front line worker or in health?" This old guy pointed out his age on said license, the guy said oh, and inside I went. I mention that he made me feel great because he didn't think I looked my age.
Cool.
Inside was a room filled with chairs and it was filling up with people. I registered I was there, got a number, and waited. Before too long they called my number and up I went. The officer at my table couldn't have been nicer. He did say, "This first shot will protect you up to 75%." As I was rolling up my sleeve I was thinking I'm so there.
After a very short while the syringe was empty and I was heading to the waiting room. There you're under surveillance for about 15 minutes to make sure you don't have a bad reaction. I didn't and before you knew it I was in the car heading home.
I can barely describe the feeling knowing you have the vaccine in you. Wonderful, marvelous, safe, armor protecting you. I'm babbling but you get the picture.
I don't have to tell you how tough this Covid-19 has been. Turn on the news, read the newspapers, listen to the radio. Tough. It felt so good to know that the times they are a changing.
I'll still wear a mask, still wash my hands a lot, and still social distance.
They say the second shot can make you feel a bit upset.
Don't care.
The upside is way up. Protected.