Sitting With The Girls

I found my 7th grade report card and it took me back to my Wonder Bread years.

When I was younger I used to hold court in class. Back then I would blurt out stuff to get a laugh and the teacher would say, "If you don't stop it I'll make you sit with the girls."

That was like putting the fox in the hen house. I spent more time in the girls' section of the class which is right where I wanted to be. 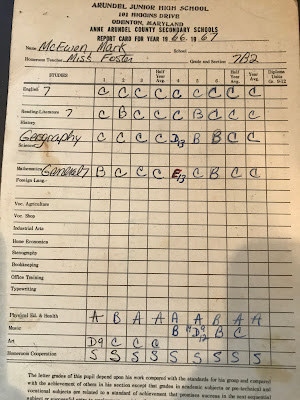 All the As are in Gym.

Also take a look, there are numbers around the bad grades. Here's what the numbers mean. 9-Is frequently inattentive. 14-Shows little effort. 12-Displays poor conduct in classroom. 13-Has poor work habits.

All a result of me just trying to get a laugh in class.

Those grades drove my parents crazy.

Let me say this, it's harder being a parent than being a kid. As a kid you have no idea that your parents worry about you all the time.

Kids don't know it but that's their future. The old joke about having children and apologizing to your folks? Funny and true.

I got older and that P.E. thing helped me to no end. I was the size I am now, albeit thinner, at 15 and everyone wanted to make me a lineman for the football team. Heck with that, I wanted to be a running back but I was the only one who felt that way.

That led me to a sport I never knew, wrestling, and that was where I got my two letters and a county championship.

But back to 7th Grade.

Remembering that far back makes my head hurt. It's like looking at objects through a vinyl shower curtain.

The bell would ring and we would run through the halls to our next class. Don't know why, we just did.

One time I was stapling things to a bulletin board and was up on a counter top. I didn't notice the stapler was open and as I was getting down I put my hand on the open stapler and stapled my palm. The staple went right into the skin.

Another time we had a track and field day and the whole school was outside to watch it. All the classes were competing against each other. In one race as the runners came around the track a bunch of girls cheered for this guy who was leading the race. He grinned, waved, stumbled, and promptly fell flat on his face.

During my whole time in school I never liked math or science classes.  In those you were either right or wrong, not a lot of wiggle room. I liked wiggle room. So civics, geography, history, those classes I gravitated towards. The kind you could b.s. your way through.

That I could do.

But I was always the class clown, the cutup.

Sitting with the girls.

I made some mistakes as a DJ. While on the air. Here are a few of them... 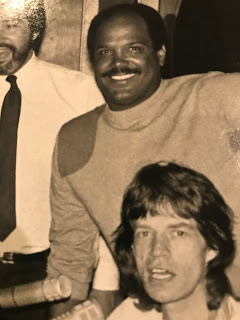 When I first came to New York it was to be a disc jockey on WAPP. It was a big station at the time and I was part of a team in the morning, the other half being E.J. Crummey.

So we're on the air one day, about to play Street Fighting Man by the Rolling Stones, and I say, "You know, there isn't an electric guitar in this song. It's all acoustic guitar." Why I said that I don't know and E.J. was incredulous.  That's not true was followed by yes it is and then we played the song.

For a while I was right and then...

Here it came, an electric guitar along with the mud on my face. Go listen and see. You'll hear I was wrong.

I'd just gotten to Detroit and was jazzed to be in a market that big. I'd come there from Baltimore and went from the high teens in market size to the then number four city.

I was on the air reading a tag for a store that included a local avenue. That street is spelled Gratiot. It's pronounced Grash-it. I'd never heard of it and pronounced it Gray-tee-ott. Oh, the phone lines lit up and was I taken to the woodshed. "Where you from?" was the first question. The listener said, "It's Grash-it @#%." I said, "I'm sorry." "I'll bet you are," he continued, "Now play me some Skynyrd."

As Popeye said, "You live and you loin." 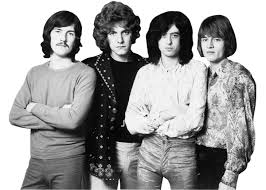 Another time, again in New York this time at WNEW-FM I was playing what is now my favorite Zeppelin song, Over the Hills and Far Away. You know how it goes. You also know it has a false ending and the song comes back and that's the end. I know it now, I didn't know it then and played the next song. 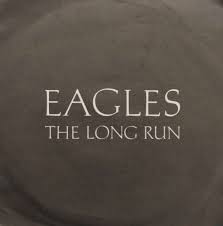 And then it happened.

We were playing records then and as I turned to put the next one down I hit the turntable arm and up in the air it went. The needle bounced a few times on the record and ended up on another song.

All this as I was on.the.air.

I hung up, fast, on my girlfriend and just stared at the hotline knowing my program director would call.

The old saying, "Sometimes it's better to be lucky than good."

And those are a few mistakes I made.

There are songs that are just songs but some times songs have words that touch your heart.

These are some that touch mine. 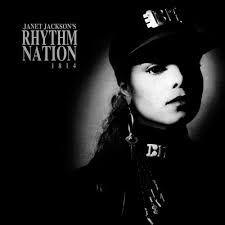 Imagine you want to get into music. Imagine your brother is there first. Now imagine that brother is Michael Jackson. Janet climbed that very tall mountain and planted a flag at the top. She did it with songs that not only made you dance but also made you think.

People forget how big this album was. Huge. Also how good it was. When this song goes from 3, 2, 1, to the music? Is there a better start to a song? While you're at it, go to youtube and check out the video. And be amazed.

One other thing, those lyrics are just as vibrant and on point today. Just saying. Some of God's greatest gifts are unanswered prayers.
-Unanswered Prayers

Garth has been this gift. Ask people. With a heart of gold, with a knack for writing great songs, and have you seen him in concert? My wife is still talking about it. When you're young you have no idea how a line like this resonates. As you live Life, and gain seasoning, it resonates more and more. Sometimes not getting something you think you want is a good thing. Trust me on this.


People keep talking they can say what they like 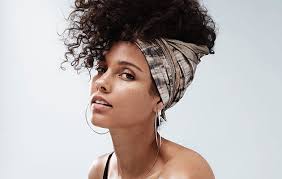 I interviewed Alicia Keys when she arrived on the scene with her first album, Songs in A Minor. She was smart, pretty, and oh so talented. I met her at the Grammys where she was up for a slew of them, she won five. She doesn't know it but this song was my wife's song for me. 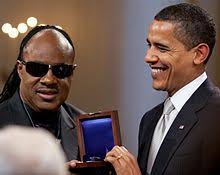 Thinking about you and me and you and me...Danny Says-The Ramones

I could drink a case of you and still be on my feet...A Case Of You-Joni Mitchell

I'd catch a grenade for you...Grenade-Bruno Mars

I think I thought I saw you try...Losing My Religion-REM

There are many more for me.

How about for you?