One of my Best Friends is Mr. Kevin Coffey. 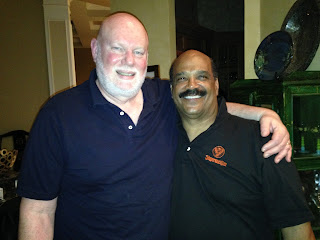 He was my producer at CBS and we went on many adventures together.

Just recently he and his lovely wife, Ronnie, stopped by on their way back from the Keys for dinner and wonderful conversation. My house was rocking from two old friends telling old war stories.

It was a blast.

Kev and I go way back, 1987 to be exact. The powers that be put us together and like Forrest Gump said about Bubba, it was like peanut butter and jelly. We saw the country, heck the world, side by side.

One time we were at Universal in Orlando and had to meet with the stunt coordinators for the Indiana Jones Exhibit. We were going to do a segment on the air with it the next day. You remember the scene in the movie where Indy runs, fast, from a rolling boulder that was going to crush him. Well, they had that same setup except for one thing--there was an opening that the audience couldn't see that dropped a person onto an air mattress as the boulder roared by. The crowd oohed and ahhed when the stuntman disappeared. It looked to them like he had been flattened. He then shows up, no worse for wear and the audience goes wild. No problem, right?

Turns out the stunt guys were kind of a pain. I told them I did stuff like this all the time and it should be no problem. Well they begged to differ, and I thought not in a nice way, and they said if they weren't satisfied they wouldn't allow it to happen. I had been up since four in the morning and it was currently seven in the evening. To say I was worn out was an understatement and to say my patience was long gone was an understatement as well. As they droned on about how tough it would be I finally said, "You're right. I can't do it," got up and left.

They watched me leave.

Kevin told me later that they said, "Is he coming back?"

Kevin had to scramble hard to find something else to shoot for the next morning. If you said it wasn't the Indiana Jones Exhibit, you would be correct.

Man, we laughed hard at something that wasn't so funny then but is now.

That was just one of the stories we told.

His wife Ronnie is special.

She is an author, a lecturer and a teacher. She's also a great mother.

A tale I've told so much Ronnies' lips move as I tell it,  I told again. We were at Vero Beach, covering the Dodger's spring training. Their daughters, Veronica and Juliet, are grown now but were little shavers then and they were on this trip. It was before I became a dad and watching Ronnie with them was a big reason I wanted to be one.

We were out on the balcony of a Holiday Inn, eating pizza, overlooking the water. She was patiently explaining to them how the moon controlled the tides. I found it fascinating and oh, so loving. Watching the girls looking up at their mom and taking all that in was just priceless. It's something I've never forgotten.

Well suffice to say a good time was had by all. 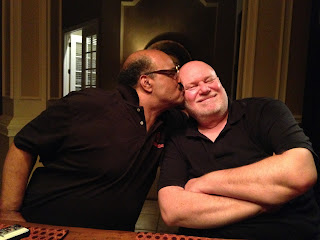 There are a zillion people you meet in life, there are a few that make you stop.

Kevin made me stop.

One last thing. My middle name is Kevin. 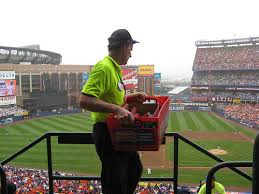 Sometimes Nothing Is A Cool Hand

I sat down in front of my computer today, put my fingers on the keyboard, prepared to write, and could think of... nothing. Sometimes the process is easy and sometimes it's not.

Do you believe in divine intervention? There are times it's as if the clouds open up, a ray of light shines through, and here comes an idea.  I believe in that concept and while it doesn't work all the time, it works enough times for me.

Ever see the movie Cool Hand Luke? It's been in the news lately with the passing of George Kennedy. Luke is played by Mr. Great Eyes, Mr. Handsome, Mr. Icon, Paul Newman. The movie begins with Luke, drunk, removing the tops of parking meters so he can ostensibly get the change, the cash, from them. The cops disagree with that and the next thing you know he's in the pen and the movie really begins. 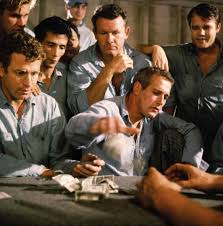 It tells a great story and also explains how he got the moniker Cool Hand. Turns out in the movie he's playing cards, poker, and bluffs even though he has nothing in his hand. Everyone folds, he wins, and Paul says the now famous line, "Sometimes nothing is a cool hand."

Since we're talking, I told my dad that sometimes writing stories are tough and sometimes they flow out like you're pouring water from a glass.

Not always the case.

Writing can be a lonely business. Just you and your computer. Oh, you can walk past the computer, glance over at it, but unless you sit down and put in the effort? There is no painting of the picture.

Back to the fact I got nothing.  I keep trying, real hard, and I keep coming up with a big, wind sweeping across the plains, kind of nothing.

Let's raise a glass to it 'cause sometimes you have to laugh and remember the phrase.

Sometimes nothing is a cool hand.