There's a story behind this picture but before I tell you that let me tell you who's in this picture.
Left to right--my dear friend Howard Grufferman, Gene Siskel (of Siskel and Ebert), a Chicago Bulls cheerleader, and me. 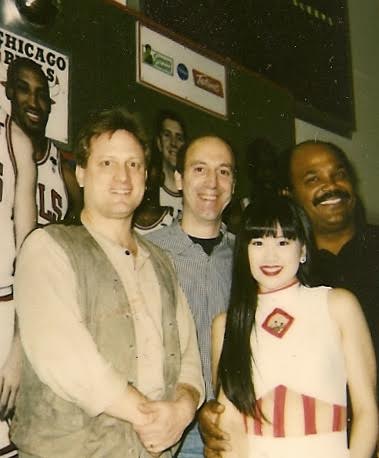 This was taken in the United Center home of the Bulls. Gene was a movie reviewer along with Roger Ebert and their TV show Siskel and Ebert gave us the phrase, "Two Thumbs Up." Gene, a huge star, was on CBS with me. We became fast friends and he gave me two ringside seats so we could see Michael Jordan play.
My guest was Mr. Grufferman and off we flew to Chicago.
Like giggly school boys we were, so excited to see MJ. In person. Gene met us outside the arena, took us in, and on our way to the seats we took this picture. That's Scottie Pippen over Howard's shoulder. I always say I'm old, 'cause I am, but I can remember when Jordan was on TV just about every week. So like giggly school boys we were.
Gene said that he and Oscar winner Spike Lee were tight and that it went back to Do The Right Thing, Spike's first big feature. Turns out Gene gave it a sterling review and a friendship was born. Gene used to trade court side seats with Spike's court side seats in Madison Square Garden. The New York guy came West the Chicago guy went East.
Back to the game.
We were vibrating actually seeing Michael in the flesh, I hardly remember the game. I couldn't tell you who they played or how many points MJ scored but I remember this. Every time he shot free throws the Arena lit up from the flash bulbs from the cameras people had in their seats. It was like seeing diamonds.
I had never seen anything like it. It's a memory that has stuck with me forever.
There's more to this story.
Howard and I had a late lunch with Gene. We went to the famous restaurant Gene & Georgetti known for it's tasty steaks and tasty seafood and tasty Italian dishes. And then we flew back to New York and the second part of this story unfolded.
On the jet Howard and I were chatting like magpies and I forget how Marilyn Monroe came up but she did. We were talking about her marriages to Joe DiMaggio and Arthur Miller, who wrote Death of a Salesman. 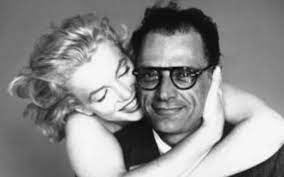 We're talking and a guy right behind us gets up to go to the bathroom. Didn't see his face. On the way back I did see his face only because he was glaring at us.
Arthur Miller.
What were the chances of that?
Both Howard and I were stunned into silence the rest of the flight.
Flew to to see Jordan play saw Arthur Miller on the flight home.