Bruce Springsteen. A Letter To You. 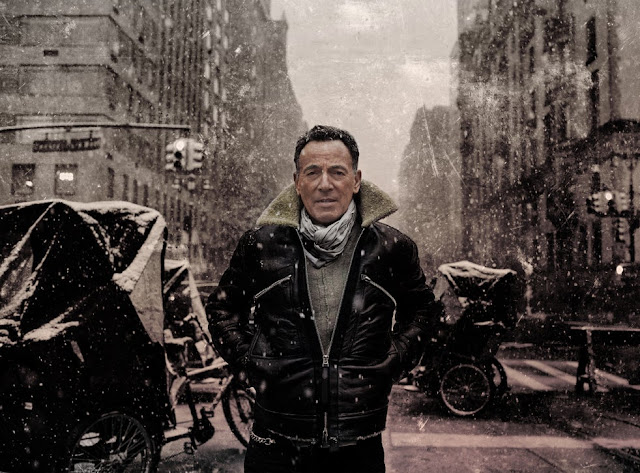 Bruce Springsteen has a new album and it's really, really good.
I've been a Bruce guy for almost 50 years, that's five oh. Think about that. That's a long time. Blame it all on my good friend Bill Wight. We were both in college at the University of Maryland.  Bill, who is from Manasquan, New Jersey, had heard of Bruce and one day said, "This guy is from Asbury Park near where I'm from, we should go see him." So we did.
And my life was forever changed.
He was so good, so real, so good. I came back from that concert a raving lunatic. And it didn't hurt that his sax player, Clarence Clemons aka Big Man, was Black. I thought that was very cool plus, plus, he treated him not like he was just some guy in the band but like a co-star.
Very cool,
Thus began my life long love affair with Bruce Springsteen. At that time he only had two albums out, Born to Run hadn't dropped and he played concerts from Jersey to Maryland; so a lot of people weren't hip to him yet. Plus getting people to try him was an uphill battle at first and I was on the front lines of that battle.
It sounds a bit ludicrous now but every new band, every new sound, has to start somewhere and that was the beginning. Well, I've seen him in concert a bazillion times since and even saw him on Broadway. I might have cried then. Maybe.
So here comes his latest record. He's older now. I'm older now. Age is different when you're older. Clarence is gone, Danny Federici is gone. My best friend? Gone. My cousin who I love dearly? Gone. My sister and brother? Gone. My Mother? Gone.  He sings about things like that. The themes, the songs on the record speak right to my soul.
I'll tell you a secret. I first listened to it in the dark of my bedroom curious to what I'd hear. Turns out I listened to the whole album all the way through. Just me, Bruce, and his music. I might have cried then. Maybe.
Did you see him on the cover of Rolling Stone? Great picture. Even greater interview inside. Over the years I've been side by side with him. He's been there through my good times and my not so good times. Over the years I've liked him as much as his music.
Great guy.
How come when they talk about his music they don't talk more about his lyrics, his poetry as it were?  Oh, people do but they talk a lot about the songs.  Music and lyrics. The words on this album as in all his albums speak volumes to me.
Getting older, man.
Some things one thinks about: You think more of being here a finite time. You think of your kids and their future. Some of us even think of our grandkids. You think about the time you won't be here.You think of people who were always here and now they're not.
Bruce thinks about all that and more. He's like an old friend to me and millions.
Bruce Springsteen has a new album. Letter to You it's called. And it's mighty fine. 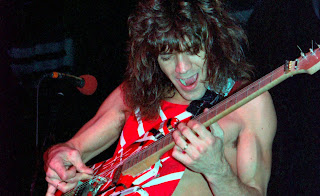 My hero Bob Gibson just passed. Prince, David Bowie, Glen Frey, Tom Petty, Luther Vandross,  Eddie Money, Maurice White, and too many more. And now Eddie Van Halen.
It seems like it's relentless.
I was a deejay on WKTK in Baltimore when I first played them. Van Halen's first album...You Really Got Me, Jamie's Crying, Aint Talkin' About Love. I played them all.
That mix was new to me, Heavy Metal Thunder on catchy pop tunes.
As I moved on to other markets they came with me. I'd never heard that kind of guitar playing before and that's the point. A front man for the ages in David Lee Roth and Eddie's band on what seemed like every radio. 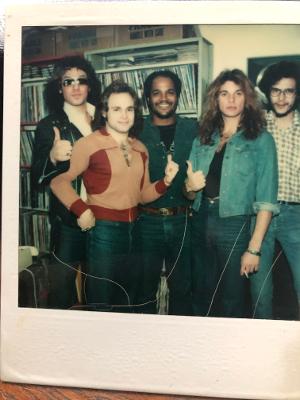 I first saw Van Halen in concert in Detroit. I was on WWWW Detroit's W4 and that's me above with every Van Halen member but Eddie.I  mention that because I first found out about him on Facebook. A dear friend of mine, Mike Skill of The Romantics (from Detroit), had a post about Eddie's passing.
Van Halen is all over my iTunes, Eddie is all over my iTunes.
Legend has it that the instrumental only version of the song Jump was played at a boardroom meeting of their record executives and they gave it a standing ovation. That's Eddie on keyboards as well as guitar. He, they, were always one of my go tos. Am I wrong saying his name with the great guitar players? Don't think so.
Okay, some history I'll bet you know...David Lee left Van Halen and their new lead singer was Sammy Hagar. I was on the radio in New York, WNEW-FM, when I heard his very first single with them, Why Can't This Be Love? I was impressed with it and said, on the air, it would go Top 5 on the charts. It went to #3 on the Billboard Hot 100.
And don't get me going on Dreams. Great song.
Later I flew from Los Angeles to New York sitting next to Eddie. We talked the whole way. A sweet, nice, guy we had a grand old time. Not once was he like, do you know who I am? And yes, I knew exactly who he was.

Eddie Van Halen had more talent in his pinkie than most people have in their whole families. He was one of the great ones. Is there a guitar player out there who sounds like him?

The last time I saw Van Halen in concert, in Orlando, David Lee Roth was back in the band and Eddie's son, Wolfgang, was on the bass. Along with his brother, Alex, on drums it was David Lee with the Van Halens.

Suffice to say they tore the place up.

I'm getting weary of saying Rest In Peace. But. 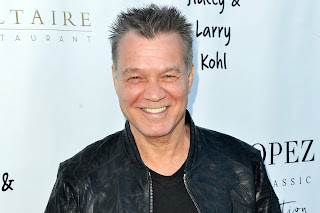