B.B. King is 89 and if you think he's always been here, well then, you wouldn't be too wrong. 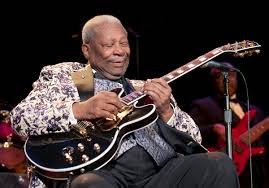 He was born on September 16 and was christened Riley B. King. He became B.B. later, that's short for Blues Boy. He learned to play guitar like no one else and has been a major influence on everybody. See, before there was rock and roll, there was blues. Ask the Stones about the blues. Ask Led Zeppelin. Ask all the seminal rock bands. Then ask Keith Richards about B.B. Ask Eric Clapton. Ask Jimmy Page.

That's a lot of asking.

And a lot of telling.

B.B. was featured on one of my Live By Request shows.  We used to have a rehearsal the afternoon of the show, to work out blocking and to get the sound right. The stars had guests and the guest that evening was Jeff Beck. He was lean, had spiky hair and Jeff's eyes remind me of a wolf's eyes. He can play a mean guitar, as well.

We were in awe of Jeff and it was fun watching Jeff be in awe of B.B. King.

B.B. never got up, he was older and played sitting down. But don't let that fool you, he was still this monster guitar player. Jeff's playing was kind of restrained, he didn't want to show up the legend. B.B. picked up on that and at the end of their rehearsal, he said to Jeff, "On tonight's show, don't be stingy."

Later that night they tore that place up.

B.B. has always reminded me of my Dad. In fact one of my twins saw a picture of him and asked sweetly, "Is that Pop-Pop?"

The first time I met him was in my early days at CBS. I've always said that my time on the radio helped me so much with interviewing musical guests. While the anchors were interested in his booking they were more interested in getting back to senators and congressmen and prime ministers; that kind of stuff.

I on the other hand was beside myself that B.B. was actually in the studio. And that enthusiasm showed through. It's different now, but back then artists were like a fish out of water on morning news shows. My job, as I saw it, was to make them feel less so. 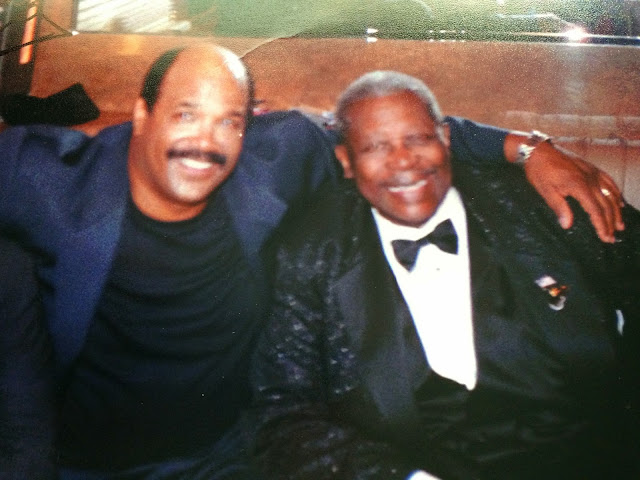 He enjoyed how comfortable I made him feel and we became friends.

Much has happened since then.

He's released over ten albums, one of them Riding with the King, with his good buddy, Eric Clapton. B.B. has garnered a slew of Grammys including a Lifetime Achievement Award. He's been inducted into the Blues Hall of Fame and the Rock and Roll Hall of Fame. Let's not forget the Kennedy Center Honors and the Presidential Medal of Freedom. His many awards will wear you out.

His famous guitar is named Lucille.

There's a story behind that name, one that's been told forever, you probably know it. B.B. was playing at a club and they had a fire pit in the middle of it to keep warm. A fight broke out between two guys and when they crashed into the pit, the whole place went up in flames. Everybody ran for their lives including him. But when he got outside, B.B. remembered his guitar was back inside. He ran back into the burning building to get it and found out the next day the men were fighting over a woman named, wait for it, Lucille.

And that's how his guitar came to be named Lucille.

If you're lucky enough to have Sirius/XM satellite radio, there's a channel on it called B.B. King's Bluesville. They play nothing but the blues and good blues at that. You'll also hear Mr. King.

A story...my dear, dear, BFF and brother, Tony Colter, was a big DJ on that channel and one day they were doing an in studio concert with B.B. Tony was to be the emcee and knew our history so he took me along. When we got there B.B. was in the dressing room holding court, sitting down of course. When he saw me his face lit up and he stood up for a hug. The look on Tony's face was priceless and he said to me later, "He never gets up!"

The BBC said this about B.B. King,"He is one of the greatest, most influential blues guitar stylists...and is without a doubt the single most important electric guitarist of the last half century."

Believe every word of it.