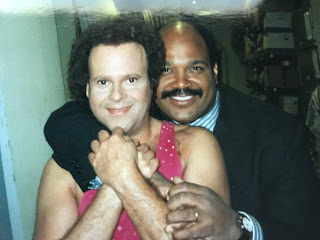 Well, I don't actually hate it hate it.

After it's over I'm happy I did it, but before? I can think of a million reasons not to do it. Maybe two million reasons. The key is to ignore those voices in your head and do it anyway. The bennees far outweigh the voices.

Exercising makes me think of Richard Simmons. He got more people off the couch and moving.

Sweating to the oldies.

I interviewed Richard once. So nice, so sweet. The best smelling person ever. In the make up chair he would break into song whenever. You'd say hello and he would sing to you.

"Good morning Richard." He started singing to me, "Your eyes, your smile..." It was great.

Later that day I was hailing a cab on Fifth Avenue and a white limo went by. The back window slowly came down and Richard shyly smiled and waved. What could I do but wave back?

May is Stroke Awareness Month and I can't stress the importance of moving, of exercise. I go to the gym just about every day and as much as it is a pain, try to eat healthy whenever I can.

The name of the game is to be here as long as you can and things like the above help you to do just that.

It's funny, Florida is full of retirees. It's one of the reasons I point to for getting great care after my stroke. Hospitals everywhere do great work on that subject but being in a place with an older population, I think, helped me tremendously.

I saw a grandmother walking this morning and I thought, "Good for you."

Exercise, even just walking, is like putting money in the good health bank.

Derek Jeter's number was retired by the Yankees and I'm more than fine with that.

I wasn't even a Yankees fan at first. 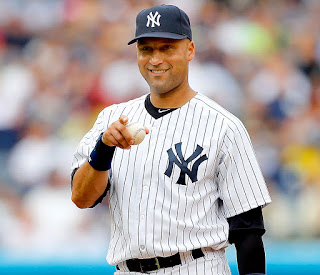 At ten years old the first team I played for was called the Cardinals so I became a Cardinal fan. Then we moved to Maryland and it was hard not to be an Orioles fan what with Frank Robinson, Brooks, Boog, Jim Palmer, and let's not forget Earl Weaver.

When I first came to New York I rooted for the Mets.  Then along came Derek. And Mariano. And Tippy. And hip, hip, Jorge. And Joe Torre. They won so many World Series and in spite of everything, I found myself a huge Yankees guy.

I have always thought Derek was classy, talented, and what I would want my sons to be like when they get older. My cousin, David, bought them some Derek Jeter tees. They had Jeter on the back of them along with his number, 2.

My twins wore them until they fell apart.

Their dad may have had something to do with it.

I'm not the first to say this but Derek Jeter's baseball career with the Yankees is a highlight reel. I never saw Ruth or DiMaggio or The Mick play but I saw Derek. And never once did I feel cheated.

His 3000th hit being a home run. That Catch he made, head over heels, going into the stands face first. Derek came out of that one with blood all over the place. And the ball.

The flip to the catcher at home plate to get an out against the Oakland A's. I saw that game on TV and my first thought, like many people, was, "Jeter's a shortstop. What's he doing there?" His last at bat at Yankee Stadium being a walk off base hit. 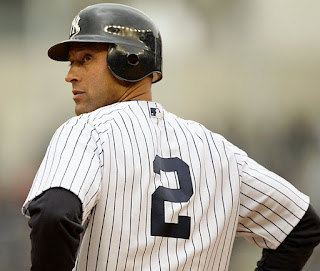 So they retired his number and ESPN broadcast the ceremony.  It was great and I might have misted up during the whole thing.

I saved the best for last.

Next stop?  Hall of Fame.