I was in Asbury Park last weekend.

It had been a while since I'd been there, actually since my radio days. As you can probably imagine there's a story behind why I was there and here goes...

She and I hooked up on Facebook. Annmarie posted a video there that her brother Tom had shot of a song by a guy named Harry Filkin. 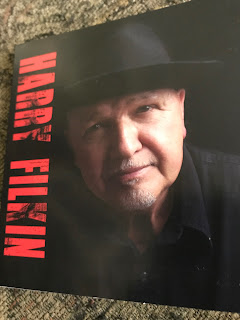 The song was "Angeline" and I thought it was very good so I shared it on my page. Her other brother, Mark, owns the record label that produced Harry's album, saw the share, and asked me if I would come and be the MC for the CD release.

The album, by the way, is very good.

And that's how I got to be in Asbury Park.

Harry is a legend on the Jersey Shore. We had one of his earlier bands, Cats on a Smooth Surface, on when my station WNEW-FM broadcast live from the Boardwalk.

Kids, the weekend was like a dream. A good one.

It started on Friday with me hanging out with Mark and his good friend, and now my friend, Tim Severson from San Diego. We shared deelish, fancy pizza.

And Harry stopped by.

It was like seeing an old friend. We talked about everything. Writing songs, musical heroes, being a dad. Everything. You know how you look up and an hour has flown by? It was like that.

Later that night, after seeing Harry in a small Jersey club, I got to bed at, like, 12:30. When you're twenty five? No problem. When you're my age? Big problem.

That day we walked on the actual Boardwalk, had dinner, and went to the Wonder Bar for the big soiree. The place was packed. Mark spoke first, then me. I thanked everyone for coming, talked a bit about my days at NEW and then introduced Harry.

He and his band were great.

Harry played the album and various covers he has played for years. As the saying goes, "the joint was jumping." He finished by playing a song I love, "Second Chance."

The night was glorious. Tonic for these troops.

It's been a long time since I was in a club.

It's been a long time since I heard live music in a club.

It's been a long time since I heard live music this good in a club.

Afterwards I went back to my hotel room and climbed into bed. The next morning, with shades on, I limped to the airport to begin the journey home.

With a new favorite CD and a new friend.

And a smile on my face.