Music has been berry berry good to me.

I remember my mom buying her 45's when I was younger and playing Sam and Dave on the box. "Hold On (I'm Coming)." To this day I say, "Coming to ya on a dusty road."

Wonder where that came from.

Yeah, yeah, I was a rock and roll deejay but know that began in an innocent place. I used to hear a song on the radio followed by another song and think, " I wouldn't have played that."

A friend of mine said, "Think you can do better?"

That's what drew me to that job. They always say to find something you like to do and it won't seem like work.

I like research, like homework, and love music. So, being up on bands, groups, artists, was always fun, not work.

Lord knows it wasn't a lot of money. I ate plenty of mac and cheese and pee bee and jays in my day, but when you're young...

So I get to the network, and there you could like all kinds of music, which I did anyway. What began as rock and roll turned into jazz, pop, r and b, country, blues, show tunes, anything and everything. 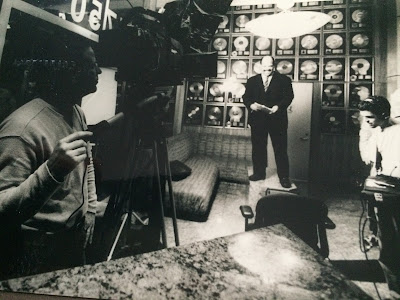 Having the background I did helped me big time with the artists. I remember asking a question and having them cock their heads before they answered. You could almost see them thinking, "A conversation about music. What a concept."

I asked Bono what was it about U2 that made them stay together.

He said, "U2 is like the four legs of a table. Together you get something special. Take one leg away and the table falls down." I never heard it put quite like that.

I talked to Lindsey Buckingham about the ending of the Fleetwood Mac song, "Think About Me."

I didn't know I was one, I just wanted to let him know that what I heard sounded cool. BUT. It sure was great to hear him say that.

Knowing music got me to talk to people who were known for not talking.

I asked Janet Jackson what she was trying to accomplish when she went into the studio.

"Perfection. To give it everything I've got."
She went on to tell me of the long hours spent in the recording studio trying to find just that.

Music has always been very important to me.

There are songs that I've thought were perfect, for decades. There are also songs I've loved, imperfections and all, for just as long. There are parts of songs that I like.

There are bands, groups and artists that are like members of my family.

They've sure helped me through my worst times.

I'll bet if you had asked Mother Teresa or Nelson Mandela they could have told you of music, of a song, that touched them.

I have a feeling we all could answer that question.