Did you see the Country Music Awards?

Did you see the duet with Justin Timberlake and Chris Stapleton? If you're like me the second name was a big Wha? I never heard of him, but I sure know who he is now.

Just a guy with a ZZ Top beard, a cowboy hat and a gift for writing great songs. Along with his wife Morgane, singing backup, he and Mr. Timberlake turned in the performance of the evening.

And they tore that place up.

Heck, that's a career right there.

Adele, Kenny Chesney, Darius Rucker, Tim McGraw, George Strait, and Luke Bryan are just a few of the artists who've recorded his songs. So Chris has been around for awhile but for me it was an entree to him and an epiphany.

I always say country music is where grown ups go to hear grown up lyrics.

Rock and roll as we knew it is pretty much dead. The last great rock band? U2. There are a few rock bands out there but the key word there is few. Can you say classic rock? I think you can.

If you turn on Top 40 radio it's a lot of formulaic pop. It's catchy but everything sounds like you've heard it before. Somewhere along the way the money guys figured out how to get people to buy the same thing over and over again. There are exceptions, of course, and you know who they are, but for the most part...

I've always liked rap and there's some good stuff out there but it's directed at young people and they're not talking to me.

As far as R & B goes is there a current Stevie Wonder, a Boys to Men, or even an Earth, Wind and Fire?

If you're looking for songs about losing love, marriage, divorce, growing older, all kinds of adult themes, country is the way to go.

Not to say you can't find songs there about partying, nightclubbing and first loves, but they're side by side with adult lyrics.

I love the song that Chris did on the CMAs, "Tennessee Whiskey."

You're as smooth as Tennessee whiskey, you're as sweet as strawberry wine, you're as warm as a glass of brandy, and honey, I stay stoned on your love all the time.

I wish someone wrote that about me.

Country today sounds like it's made by people who were brought up on rock and roll as well as country music and I'm fine with that. Like what you like is a mantra of mine. Thing is, a lot of what you hear nowadays doesn't sound like what it did back in the day.

Chris, though, kinda brings us back to that. 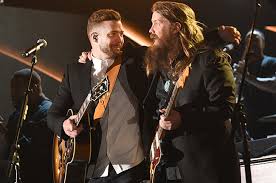 And if you saw that performance and looked at the faces of the artists in the audience, as the cameras were panning around, they were fine with it, too.