In 1964 I played for my first Little League team. 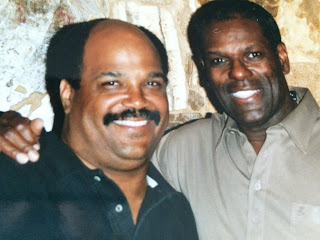 I was in Berlin, Germany, I was 10, and I was a pitcher. The teams' name? The Cardinals. Across the Atlantic, in the World Series, the St. Louis Cardinals were beating the New York Yankees.

He made me a Cardinal fan. Those teams were great. Lou Brock, Curt Flood, Orlando Cepeda, and Bill White were just a few of the players. Plus a guy who's known more today as an announcer than a ball player, Tim McCarver.

I was just glad he talked to me.

Bob's Cards won the series in '64, '67, and almost in '68. They say almost only counts in horseshoes and hand grenades. Well, it also counted in that series. Ask Detroit Tiger fans, they'll tell you. A slip and a world championship. They'll know what I'm talking about.

For years I would say that if there was one game for all the marbles, you could pick whomever you wanted to be on the mound. I'm picking Bob Gibson to pitch that game.

So, life goes on, and I'm the weatherman on CBS. Now and again I would  point to Omaha on the map, where Bob lives, and say the high there that day followed by, "home of the greatest big game pitcher, Bob Gibson."

One day he released his second autobiography and I'm in my boss' office begging," please, oh please, can I go to Omaha so I can meet and interview Bob Gibson?"

I go, and it was like a dream. I met him, his wife, Dear Wendy, his son Chris and his mother in law. He picked me up at the hotel, I had dinner at his house, we talked and hung out. And I fainted.

Just kidding but it was great.

The next day, I interviewed him on the air. From then on, he was just Bob, my friend.

Once, he came to New York and we watched the NFC football championship game on television. I asked him, "When you walk the streets of Manhattan, what do Yankee fans say to you?"

See, living there, I knew they could be, how do I say this nicely, kinda outspoken, when it came to players of other teams. Especially someone who beat them in the World Series.

They appreciate a battler, a tough as nails competitor.

Bob used to have a golf tournament and gala for charity and I went every year. Used to close up the joint. At one of them, I knew I was having twins, and told him one of them would be named Miles Gibson McEwen.

With a big smile on his face, he said, "What's wrong with Bob Gibson McEwen?" Followed by us laughing. 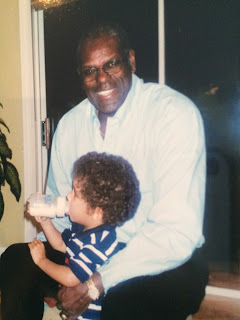 He and Wendy came to our house in Florida and Bob met Miles.

One Gibson meeting another.