I was in radio when I first met Tom Hanks. 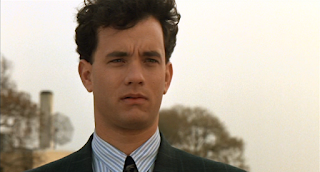 I was a morning DJ in New York and he was a guest. Most people knew him from the movie Splash.  He hadn't become the two time Oscar winner, box office gold, Forrest Gump guy, yet.

He was there to promote his new movie Big. Not only was it a good movie but he was great in it. He was also a great guest. Funny. Smart. Told first rate stories of growing up in California. He talked about being on theater sets in Cleveland.

We were in the middle of our show and we were playing a game with our listeners called Rock and Roll Jeopardy. "And if they're right," I said, "Tom, tell them what they win." He was supposed to say, "A WNEW-FM alarm clock." What he actually said was, "What a jive gift!"

We broke into howls of laughter.

Our promo person heard that exchange on the air and, to put it mildly, was not very amused. Tom didn't get the dressing down later. I did.

And that's how I met Tom Hanks.

The next time we saw each other, I was on CBS and had just started doing Entertainment. As I walked into the room to do the interview he said incredulously, "They sent the weather guy?" "Oh right, Tom," I answered, "You're Hard News." He looked at me. I looked at him. And we both started laughing.

Let me tell you about a few of his movies...A League of Their Own, Sleepless in Seattle, Philadelphia (won the Oscar), Forrest Gump (won the Oscar), Apollo 13, Toy Story, That Thing You Do!, Saving Private Ryan, You've Got Mail, Toy Story 2, The Green Mile and Castaway.

How many of them have you seen? 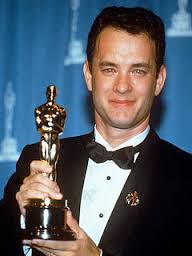 When I spoke to Tom the night he won his first Oscar, I asked him a question. "How do you deal with everyday life when every headline says you're going to win?"

"All I can say is you can't put any faith in it whatsoever. You treat it as a nice accolade and you move on." He added with a chuckle, "Or it'll drive you stark raving nuts."

He won the following year for Forrest Gump and the Tom Hanks legend grew.

People compare him to another famous actor. They say he is the Jimmy Stewart of our age. They talk about how Jimmy was kind and decent. I never met him but I'll say this about Tom. He hasn't changed one iota because of the grand ride he's been on. He's still kind and decent. 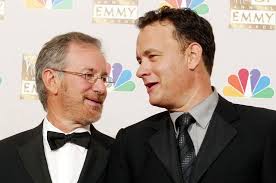 He had just made Saving Private Ryan, directed by the most famous director of our time. A Hollywood legend.

Talking about Steven's directing style Tom said with a twinkle in his eye, "He's kind of this doofus and then he gets on a movie set and turns into Thomas Edison inventing the light bulb."

I couldn't believe my ears. Did he just call Steven Spielberg a doofus?