Every year in January, I've been celebrating two birthdays. 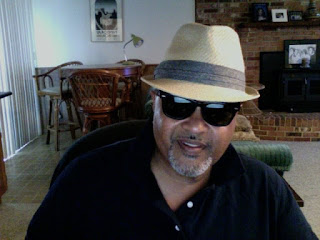 First up, on the 23rd, is my Bestest Friend's birthday.

That would be Tony Colter.

He's not only my ace, not only Uncle Tony to my twins, not only does my dog not bite him; she doesn't even growl at him; but he's also a DJ on Sirius/XM.

People have known him for years as MadDog 'cause that was his moniker on terrestrial radio. What's so funny is in real life he couldn't be further from being a mad dog. He is kind, gentle, smart, a great father, great husband, and as I said, my best friend.

I've known him since we were kids and in fact just spent a weekend with him in southern Florida. He's on Bluesville and Watercolors on satellite radio, and now voices those shows in the winter from the warmth of the Sunshine State.

I told you he was smart.

He rented a house and has a make shift studio in a walk-in closet there. Tony has a desk, a microphone, a laptop, and moving truck pads to help muffle the echo in that room. He's surrounded by his research and as Jackie Gleason used to say, "And away we go."

I told him when he's done recording a show it gives new meaning to the term coming out of the closet.

The second one is on the 30th.

It's my Dad's birthday.

My Dad has been my father forever and I may be a bit partial here but I think he is bossa nova special.

I've told you before that he was a Colonel in the Air Force and helped raise six kids with my Mom. He always sang, has a great voice, and currently sings in the choir at his church.

Would he be upset if I told you this birthday is his 87th?
I don't think so.

There are plenty of stories to share with you.

We kids were little and were taught to say, "Yes sir and no sir." Military you know. My mother told my father that sounded too formal and could he talk to us about it.

He gathered us around and said, "Your mother and I have been talking and we don't think you should say yes sir or no sir to me anymore."

We nodded our heads.

"We think you should say yes dad or yes father."

Happy Birthday to my Dad.

Happy Birthday to two of the most special people in my life.