Let's go to the Wayback machine.

Back when I had my stroke.

There I was laid up and not knowing where to turn for rehab. There was the traditional rehab covering the usual suspects, Physical, Speech, and Occupational therapies. But I'm not here to talk about them but instead my experiences with NON traditional therapies.

My rule of thumb is that when stroke strikes, try anything, and I do mean anything, to heal, to get better. I say if it works, keep it, if it doesn't, discard it and move on.

A couple of turns I took around the dance floor...

So there I was in a dimly lit office with my eyes closed listening to a voice saying, "You're getting sleepy..."

Truth was, the voice didn't say that, and I never felt sleepy.

Fact is, I didn't feel anything but it was my first foray down the 'try anything' road. It was early in my rehab and the thinking was that this kind of therapy would help me to accelerate the healing. Well, at least that was the purpose.

Remember, I said try everything. Eventually I left. Which leads me to...

My stroke was an ischemic stroke. A clot blocked blood and oxygen to my brain. Stands to reason that a jolt of oxygen would be good for me. And it was. I lay flat on my back and was put inside a hyperbaric chamber and breathed in pure oxygen for an hour. 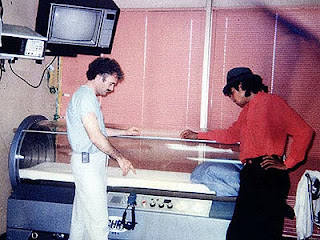 I first discovered hyperbaric chambers from that picture of Michael Jackson with one.

Mine was a glass lined chamber, sort of like the kind of tube a person uses to get an MRI. But cozier. I had to go to a changing room where I took off my shoes, jeans, and shirt. I replaced them with a robe and off I went. In the chamber itself, I watched TV or listened to music or took a nap. I breathed in the oxygen the whole time. At the end of every session my wife said my speech was clearer and I moved better. There was just one thing...

It was about $200 a shot and my insurance wouldn't  cover it.

It's been around a long time, some believe it originated around 100 BC in China. It's the practice of inserting needles into the body. I heard that and on came the cold sweats.

First of all they're small, thin needles. 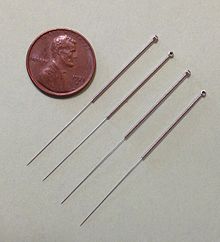 And second, I'm here to tell you they don't hurt. Didn't hurt me.

Acupuncture is done many times in conjunction with laser therapy, mine was. My stroke affected my dominant side. I'm right handed. So, I went there to mainly help my right hand.

Just recently I was contacted by an acupuncturist, she says she might be able to help me even now. As they say in the movies, I'm going back in. More on that whole experience later.

My stroke was massive. It's taken me down a path I didn't even know was there. Trying things I didn't know existed. Anything that helps you get out of that dark space, is worth checking out as far as I'm concerned.

All strokes are like snowflakes. Different. So are the ways to combat them.

Don't be afraid to try them.