This was in a hotel room in New York.

That's George Harrison, me, and the other person is Ravi Shankar. Now, if you are of a certain age, Ravi needs no introduction. If not, I guess you can just say he's Nora Jones' father. 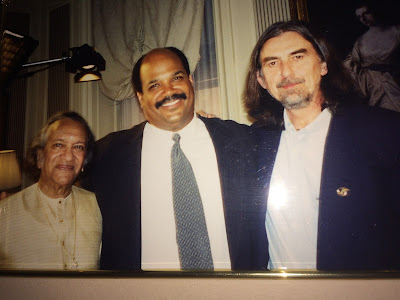 My good friend, and CBS This Morning co-host, Harry Smith saw this and casually asked, "Who's the woman?" I thought that was funny then and I still think it's funny now.

A bit of well known history.

They were called the Fab Four.

Of course I'm talking about the Beatles. They made many of us pick up guitars, write songs and form bands.

They also changed the world.

George was one of those four. If you're younger you've heard and read and heard and read what a big deal they were. It's absolutely true. Every move, every utterance, everything they did was done under a microscope.  It's not a secret when I say there isn't a group today that is close to being as big as they were. The release of an album was a huge deal back then. Before "Hey Jude" songs on the radio were like two and a half minutes long, maybe three. "Hey Jude" clocked in longer than seven minutes. What to do? Radio played it anyway.

Just one story in a very long line of stories.

Back to why I was there.

It was for the release of Ravi Shankar's album, Chants of India, produced by, you guessed it, George Harrison. They'd been friends for decades and it was fun watching them. They finished each other's sentences, laughed at each other's jokes and were very comfortable in each other's company. George knew that being involved in the interview would get major attention for Ravi and he was right.

There was just one catch.

His publicist said we couldn't ask him anything about being in 'that group' or about any of his solo work. The whole interview had to be about Ravi, and George's involvement with Ravi's music.

And that's where the fun began.

My job was to bring up the Beatles without stepping over the line that had been drawn in the sand. I was excited to be around George and also nervous not knowing how our talk was going to go.

For him? One in a zillion interviews he'd done. For me? A rare chance to talk to a Beatle.

When we were settling in I mentioned I was a new father and my daughter's name was Maya.

Ravi said excitedly. "Do you know what Maya means?" I didn't. George jumped in,"It means many things, but one definition is one of extraordinary power and wisdom." That was pretty cool. We chatted about my Maya for awhile and then got down to the interview.

We discussed Ravi's music, his new album, why George thought it was so important, and then came the moment when I brought up the subject I wasn't supposed to bring up.

"You were in the Beatles, the biggest band in the world," I said. " You met kings and queens and  talked to movie stars and captains of industry. What was it about this man that made you stop?"

Georges' eyes twinkled as he answered. "We'd met everybody and hung out with everyone and all kinds of people told us we were this and we were that. Truth was, I was tired of all of it and then this little man (and there he turned and smiled at Ravi) came into my life and made it worthwhile again."

When George was done, I thought, "I'm good."

The interview wound down and it ended. 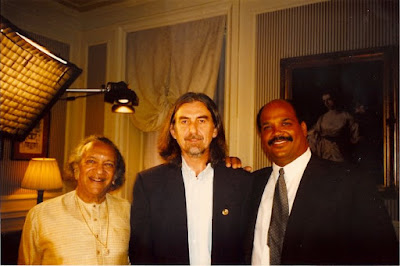 We shook hands, took a couple of pictures and off they went.