A Long Time Ago In A Galaxy Far Far Away...

A few memories from my days at CBS... 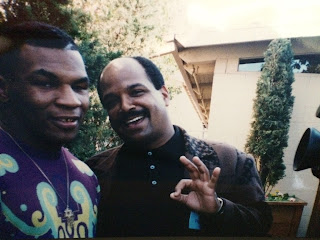 Remember Desert Storm? Now remember the song "Voices that Care?" That was its version of "We Are the World." An all star lineup recorded it-Michael Bolton, Luther Vandross, Celine Dion, Will Smith, and Bobby Brown were just a few of the people that were in the studio that day.

There were celebrities there as well, Michael Jordan, Meryl Streep, Magic Johnson, Chevy Chase, Kevin Costner and Iron Mike Tyson among others.

It was one of those check your ego at the door kind of things. There were alot of famous people there but Mike was the person I wanted to meet. Truth was he was very nice, shy, quiet, not at all like what I thought he would be. Also, truth was, I was scared of him. People forget how fierce he was as a boxer. He knocked EVERYONE out. He didn't just knock out people, he destroyed them. And fast. I always wondered what it would feel like to know you can take anybody in the room. I bet Mike knows. I know Mike knows. No sudden moves was my motto and I followed it. I didn't want him to hit me. Of course he wouldn't but you can't be too careful...

By the time "Voices that Care"was released, Desert Storm was over.

So the song never made an impact.

Sometimes that's how it goes.

When I first started on mornings at CBS we had a studio audience.

I wasn't hip to the fact that everybody came through our show and I do mean everybody. So there I was, on the sidelines, standing between the bleacher seats, watching the current segment. I had finished with my weather and was free for awhile. I casually looked to my left and everything seemed to stop. What I saw made me gasp. It was the French actress Catherine Deneuve who was waiting to be interviewed next.  I knew who she was, what I didn't know was how beautiful she was in person. I mean stunning. She was more from the era before me so those people knew. I didn't. Just standing there she actually took my breath away. I'll never forget it. That image was so powerful that I still recall it today some 30 years after it happened.

It's funny what stays with you.

Later on, I went to a screening of a movie called This Boy's Life. I went because I was supposed to interview Ellen Barken and Robert DeNiro about the movie and their roles in it. Barkin was a single mom who marries DeNiro who turns out to be a hard ass. A crazy hard ass. But a funny thing happened, there was this young kid who played her son, who not only acted his tail off, but was in DeNiro's face all through the movie giving back as good as he was getting. It takes cojones for an adult actor to do that, it takes even more for a young actor to do that. 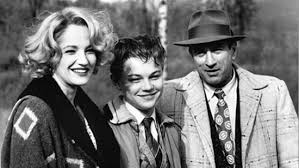 When it was over I said to my producer, "Who's the kid?"

She told me his name, "Leonardo DiCaprio."

I thought, "That's a different name," and I also thought, "I've never heard of him."

We did.  He was all of 18, it was his first major movie, it was his first network interview, and he was dazzled by everything. The lights, the set, just the fact that he was there. He answered every question I asked him.

And you know what has happened since then. Many movies including one called Titanic.

It's been fun to watch.

Sometimes you get lucky.