Since it's NBA Finals time, I figured it's about time for my all time top five. Keep in mind three things...I'm not a sports writer so this is purely me. I only mention people I have seen, so people like Oscar Robertson and Bill Russell are out. And I forget the third thing... 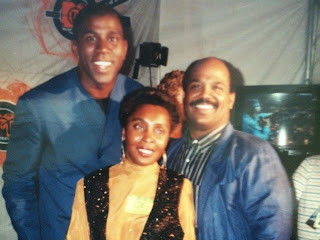 At guard you have to start with Magic. Full name Earvin Johnson, aka Magic. Start with the fact he's 6'8'' and the whole game flowed through him. When I was in high school our center was 6 foot 5. They used to play people that tall at forward or center but not guard. Magic changed all of that. He could pass, he could shoot, he could rebound. I remember before ESPN we saw players, teams from outside our area, no matter what the sport, only during playoff time. It was during the NCAA basketball tournament and here comes Michigan State led by Magic Johnson. I'd heard about him so I plopped down on the couch to watch him and he was better than advertised. He shot four times that game and controlled the whole thing. One last thing, in the NBA he also won a bunch of championships with the Lakers. All this at 6 foot 8. 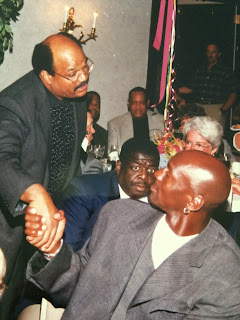 Say no more. He's the gold standard that everyone else is compared to. A rock star if there ever was one, and go ahead count the rings. We'll wait. At the height of his career when the Bulls came to town? It was like the Beatles. He did the impossible. Routinely. And even now people speak his name in hushed tones. I saw him live once, in Chicago, and I was taken by how, when he shot free throws during the game, flash bulbs lit up all across the arena.  Like diamonds. I'd never seen that before.

There were two memorable people who changed their name...Cassius Clay to Muhammad Ali and Lew Alcindor to Kareem Abdul-Jabbar and he would be my center. Before him seven footers were...just seven footers. He was the first big man I saw who could actually move and shoot. I was 13 and stayed up late to watch him play, in college, in the Astrodome as UCLA took on Houston. His eye had been scratched and they lost. I waited until they played again in the NCAA tournament. He was healthy then, wore goggles, and UCLA destroyed them. Six times he was part of the last team standing in the bigs. He had the skyhook in the pros. An unstoppable shot. He's the all-time leader in points scored. What do you call a burning ember at a Hawaiian cookout? A Luau Cinder. 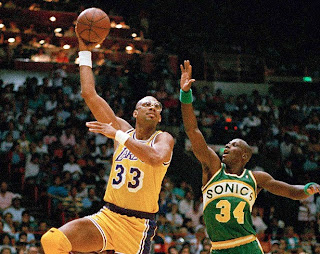 I finish up with two legends at forward.

First, a guy who couldn't jump.

Larry Bird made every important shot there was, made all kinds of passes and got lots of rebounds.

Was there ever a tougher competitor?

Famous story...the first three point competition at the All Star game, and Bird walked into the locker room and proclaimed, "Which one of you guys is going to finish second?"

And then won it.

If you can do what you say, that ain't bragging.

Some people forget the finals between the Celtics and the Lakers. I don't. They were fierce. Boston was there in a major way because of a guy who they said couldn't jump.  Larry Legend.

And then LeBron James.

He's the reason this whole list came about and he's also the only one currently playing. People will be telling their grandchildren about him. He can shoot. He can pass. He can play defense. He can carry a team, by himself, to the Finals. Heck, I could be on the team.

FIFTH NBA final in a row.

That's impressive. More than Magic, more than Michael, more than Kareem.  He went from high school to the pros and played like a man while still a boy. LeBron won two titles in Miami, then went back to the Cavaliers and won one there. 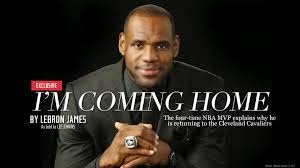 He's from Akron. I've always said he could run for senator from Ohio when he's done and win. They love him that much. When it's all over he'll go down as one of the all time greats.